2021 Who's Who in Building & Construction 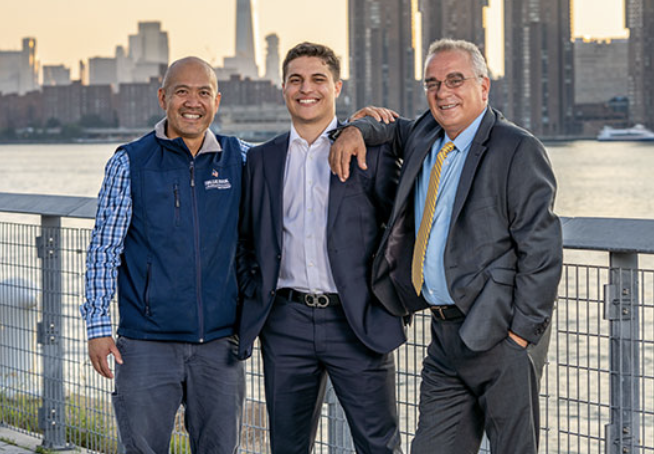 “I’ve had a love for buildings since I was a child,” says Vebi Barami, President of Barami Construction Group. “And I fell in love with New York City immediately—the buildings, skyscrapers and high-rises were unique and something I had never seen before. No city compares to Manhattan.”

His first taste of New York City came in 1990 when Vebi was visiting friends in the U.S. He found himself captivated by the borough of Manhattan and its architectural marvels and public spaces that create a network brimming with innovation and creativity. He was a long way from his home in Kosovo, in what was then Yugoslavia, but he was on an adventure that would make an immediate impression on him and have a lasting impact on his future.

It was here that he renewed his childhood dream of being in building design and construction.

“I began meeting people and took courses and found I could contribute my piece of art to this great city. It means the world to me that I am one of the people constructing or improving the buildings in New York,” he says.

“I started the company by myself,” he says. “It was only me and over time I created a great team. An owner must have a great group of people around him. We started meeting clients, and project-by-project, we became one of the most well-known general contractors in the city. Barami Construction Group is a full design-build company. We have great architects, engineers and designers within our group.

“I want to thank all our clients, our team, our employees, subcontractors and suppliers who have helped us to grow substantially in business,” Vebi adds. “Special thanks to The Blue Book Network® and Darwin Lee, the Network Development Director, for helping connect us with many potential clients.”

Vebi’s son Roni is Barami Construction Group’s Vice President, and he continues his work on residential and commercial jobs, private and city contracts, and interior and exterior renovations that have helped establish the company as a versatile leader in construction. Lona Barami, Vebi’s niece, serves the company as Director of Operations.

For Vebi, it’s all about creating a great team aligned with bringing the best ideas together, valuing the expression of the group over the individual, and establishing a team environment built on respect, collaboration and communication, all with a passion to exceed every client’s expectations.

“We treat everybody as equals,” Vebi says. “We have good laborers and management, supervisors and project managers and people who make the company successful. We have the right people in the right positions, and everyone knows their role.”

That sense of extreme accountability has been what has made this company thrive. It’s a day-to-day process built on client satisfaction, quality and delivering on time. Vebi focuses on planning to anticipate the variables of the business.

“There’s no routine in construction—every day is different. And every job is a challenge, one way or the other,” he says. “I make sure that we’re prepared the day, week and month before so there are no surprises. With general contract work, there are a lot of components. You must communicate well and make sure everything’s going as planned. Sometimes the client wants to do something different from what the architect has drawn, so you must be flexible and adaptable. Every client is special and should be satisfied, and every job, whether it’s big or small, residential or commercial, should be completed on time and within budget.”

The last several years have been filled with exciting and challenging opportunities. Lona and Vebi enjoy relating stories about some of the many and varied projects the company has completed for a wide range of clients.

Barami Construction Group took on three projects at the Bronx Zoo in January 2020. In the first one, crews demolished an existing giraffe feeding platform and fence and then built a new 2,500-square-foot plywood and metal feeding platform, decking and stairs. The company then replaced concrete curbing, installed a new chain-link fence and supplied new electrical wiring to mechanical feeders for the giraffes on the platform.

“We had to be very careful about making noise during construction,” Vebi recalls, “because giraffes don’t like a lot of commotion! To accommodate this special need, we worked at only specific times during the day to keep our disturbances minimal.”

Another significant company project is the renovation of 25,000 square feet of office space in Manhattan. The former offices will be transformed into 105 dormitory-style student and intern rooms for Educational Housing Services (EHS). EHS manages the property, which is only open to students and interns on a semester-based system. Construction involved only one floor and the rest of the building remained open to the public throughout the renovation process.

“This is a multifaceted project in which we’re coordinating with many mechanical, electrical and plumbing trades,” Lona says. “It’s a true test of our coordination and skills to get the job done.”

Barami Construction Group also built two Calvin Klein and two Sephora beauty stores within two Kohl’s locations in Havertown and Harrisburg, Pennsylvania. For shoppers, the appeal was experiencing the “store within a store” concept at each Kohl’s location.

“We were given only 18 days to finish both projects. And during the first week, we couldn’t work during the daytime because the Kohl’s stores needed to remain open. Near the end, we began working 24-hour shifts to complete the project,” Lona says. “We needed to work very closely with the architect because we realized the construction space wasn’t the same as indicated in the drawings. The measurements were different, so we recommended ideas to help modify the design. The client still got the look he wanted but just with different dimensions.”

Safety is at the forefront of every job, but especially with the company’s apartment renovations for JASA Housing in Coopers Square, Far Rockaway and Brighton Beach, New York. JASA is an agency that operates 10 affordable housing properties serving older adults in New York.

“We are renovating tenant occupied apartments that house senior citizens. We need to be in and out in 10 days while making sure that tenants always had access to either their bathrooms or kitchens. This requirement is something that typically requires safety, coordination and cleaning,” she says. “So, we developed a detailed schedule to fully renovate the apartments and keep seniors connected to necessary facilities, and we’re meeting the timeline. We see the seniors get so happy after seeing the finished apartments. This is a great project that made us very proud.”

“Navigating the weather was probably our biggest obstacle since work was all performed outside,” Vebi says. “So, we needed to plan work around rain, snow and cold. Our materials used for electrical components and decking also needed to be weather resistant."

“We loved making this addition to the New York Aquarium—a structure that’s the first thing visitors see when they arrive,” he adds.

Since its origins more than 15 years ago, the culture of the company has reflected its heart and commitment to the families and communities who call New York home. When Hurricane Sandy hit in 2012, for instance, it devastated the coastal peninsula of Far Rockaway in Queens. The aftermath impacted thousands of families who experienced widespread flooding, power outages, fires, damage and decimation of their homes. Barami Construction Group responded by making partial or full renovations to 360 apartments in six buildings and assisting hundreds of families at the Nordeck Co-Op. The Far Rockaway project took Barami Construction Group more than a year to accomplish and was one of Vebi’s proudest moments, allowing him to give back to the community he loves.

“Far Rockaway was one of our biggest projects,” Vebi says of the rebuilding and renovation effort. “We brought back hope to this part of the city. We helped families resume their lives. The best parts of construction are the unexpected moments—when you satisfy a client or make a family in an apartment happy. It makes all the time and hard work you pour into a project worth it.”

Back to all Posts